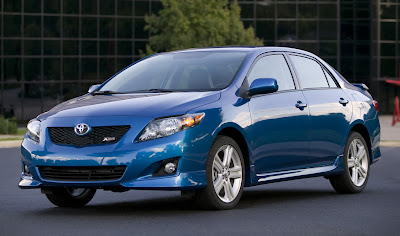 took the wraps off the 10th generation Corolla that will be available in dealerships from February 2008. But wait, haven’t we seen this car before? Yes, we have as the 2009 Corolla sedan is no different from the European or Chinese Corollas that were presented in 2006. In , the new Corolla sedan will come in five grades – Standard, LE, XLE, the sporty S, and the performance-driven XRS.

The Standard, LE and XLE models will be equipped with an all-new 1.8-liter Dual VVT-i engine producing 132 Hp and 128 lb-ft of torque. The engine can be matted either to a five-speed manual or four-speed auto gearbox. According to , the 1.8L version will achieve preliminary EPA city/highway fuel economy ratings of 27/35 mpg. As for the new Corolla XRS grade, there is a 2.4-liter VVT-i engine delivering 158 hp and 162 lb-ft of torque. Preliminary EPA city/highway fuel economy for the 2.4L engine (paired to a standard 5-speed manual and optional 5-speed auto), is 22/30 mpg. -Details & high-res image gallery after the jump

"Nearly 40 years after the Corolla was introduced to American drivers, the 2009 Corolla will continue to offer the quality and value for which the brand has long been known," said Tim Morrison, Toyota Division corporate marketing manager. "In style and substance, the tenth-generation Corolla will have a strong, new identity, all its own. It will be far more than merely the next-generation Corolla and will position itself perfectly above our entry-level Yaris and below our sales leader, the Camry."

Originally launched in in 1966, Corolla first arrived in in 1968 to instant success. For nearly four decades, Corolla has been synonymous with quality, style and value, earning a distinction as one of the most trusted cars in . Over that span more than 30 million Corollas have been sold worldwide, making it one of the best-selling cars of all time.

The new Corolla remains true to the brand’s role as a subcompact sedan, with dimensions similar to the model it replaces. But it offers an all-new body with a lean, stylish shape, and it delivers increased interior and luggage room, more power, more economical engines and an all-new chassis and suspension.

The all-new Corolla will come in five grades – Standard, LE, XLE, the sporty S, and the performance-driven XRS.

The Corolla’s wide, low profile was developed by Toyota Design in collaboration with styling studios in . Its foundation was set by the search for a lower, sportier shape than that of the previous Corolla. That search drove the decision to move the bottom of the A-pillar forward and the bottom of the C-pillar aft to increase the angle of the window glass and to improve the Corolla’s aerodynamic performance.

The standard body kit on S and XRS models helps to modify aerodynamics and enhance the Corolla’s sporty look – these include a front underbody spoiler, fog lamps, rocker moldings, upper and lower rear spoilers, and for improved air management under the car, engine undercovers.

The 2009 Corolla’s interior is sporty and distinctive – with roomy-feeling comfort. While Corolla maintains the same headroom, legroom and shoulder room as the previous model, it feels larger, thanks to a design that enhances comfort and improves utility, usability and storage.

A variety of useable, easy-to-reach storage spaces add convenience and usability to the 2009 Corolla’s interior. These include center console side pockets, a storage box above the usual glove box, front and rear door pockets that can safely hold 20-ounce bottles, a console box with a large-capacity main tray and a smaller accessory tray, an overhead console useful for storage of sunglasses or garage-door openers, and a rear-seat center armrest with an integral drink holder.

Map lights that illuminate independently are supplied for both driver and front passenger. And to aid in ingress and egress, retractable handgrips are supplied above each door opening.

The Standard, LE and XLE models will be equipped with an all-new 1.8-liter engine. The 16-valve, DOHC four-cylinder engine with Dual VVT-i (Variable Valve Timing with intelligence), produces 132 hp at 6,000 rpm and 128 lb-ft of torque at 4,400 rpm. Corolla models equipped with the 1.8-liter engine will achieve preliminary EPA city/highway fuel economy ratings of 27/35 mpg.

A five-speed manual transmission is standard with the 1.8-liter engine, and a four-speed automatic Electronically Controlled Transmission (ECT) will also be available.

For those who crave just a bit more horsepower and torque, there is the 2.4-liter engine. This engine is completely redesigned for use in the new Corolla XRS grade. The 16-valve DOHC engine with VVT-i produces 158 hp at 6,000 rpm and 162 lb-ft of torque at 4,000 rpm. Preliminary EPA city/highway fuel economy for the 2.4-liter engine is 22/30 mpg.

The 2.4-liter engine will be paired with standard five-speed manual and optional five-speed automatic transmissions.

Safety features on the all-new Corolla include standard driver and front passenger airbags, front seat-mounted side airbags and two-row side curtain airbags.

Front seats employ active headrests as standard equipment. When the vehicle is struck from the rear, a cable-actuated mechanism in the active headrest moves the headrest upward and forward to limit the movement of the seat occupant’s head.

’s Anti-lock Braking System (ABS) is standard on all grades of the Corolla and Vehicle Stability Control (VSC) with Traction Control (TRAC) and an off switch is available.

The all-new Corolla will be loaded with a comprehensive list of standard performance and convenience features. All models will be equipped with a heavy duty rear window defogger, AM/FM/CD audio with four speakers that is also XM® satellite capable, auxiliary audio input jack, air conditioning with air filter, tilt and telescopic steering wheel, 60/40 split folding rear seats, and much more.

The all-new Corolla will reach dealerships in February 2008.