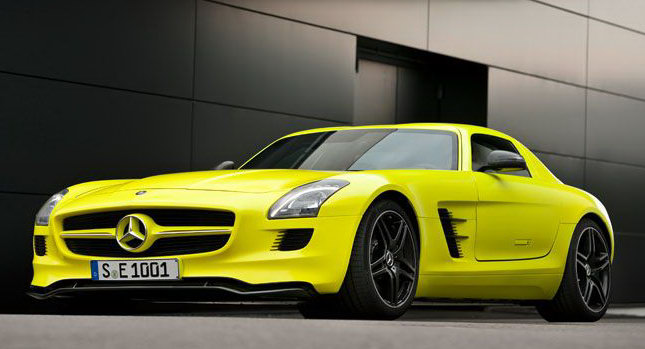 Approximately a year ago, Mercedes-Benz officially revealed plans to develop a fully-electric version of its SLS AMG supercar. Now, the German automaker has unveiled a prototype model of the car named "SLS AMG E-Cell".

The electric motors produce a combined output of 392kW or the equivalent of 526HP and a maximum torque of 880 Nm / 649 lb-ft, the latter available right from the start. One transmission per axle transmits the power.

Mercedes-Benz estimates that the zero-emissions SLS AMG model can accelerate from zero to 100 km/h (62mph) in around 4,0 seconds.

Electric energy is provided by a 400-volt, liquid-cooled high-voltage lithium-ion battery pack that can be recharged under braking. The battery modules are located in front of the firewall, in the centre tunnel and behind the seats, with Mercedes claiming that advantages of this solution include the vehicle's low centre of gravity and the balanced weight distribution.

According to the company, the installation of the drive components required no changes whatsoever to the Gullwing model's aluminium spaceframe body.

There are a few notable changes to the SLS AMG E-Cell's exterior and interior. Aside from the prototype's bright "AMG lumilectric magno" paint job, the all-electric Gullwing gets a unique front apron with an extendable front splitter, color coded grille trim, revised air vents, dark finish for the mirrors and wheels and a new rear diffuser that does away with the standard model's tail pipes.

Inside, there's a revised instrument cluster with displays for speed, charge status, and estimated range, and a new touch-screen infotainment system that not only operates audio, climate, and navigation functions but also displays the flow of power from the four electric motors.

The new black-and-white mix of leather and Alcantara on the seats, steering wheel, door linings, and center console round off the changes over the conventionally-powered SLS AMG.

Mercedes has yet to say when the SLS AMG E-Cell will enter production, but it is believed that it could be available in a limited number of units as early as 2013.