GM Claims it has Received 10,000 Pre-Orders for new Camaro 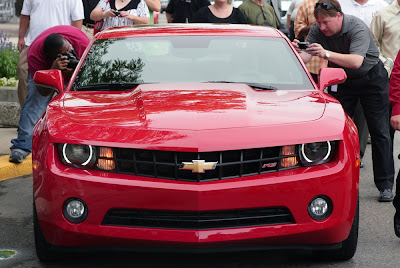 Even though the all-new Camaro has yet to hit Chevy's showroom floors, General Motors reported that it has received some 10,000 pre-orders for the retro-penned sports car. The announcement was made by GM's head of North American marketing and sales, Mark LaNeve. The new Camaro will be offered with a base 3.8-liter V6 with 300HP and a 6.2-liter V8 unit developing 400HP when hooked up to an auto transmission and 422HP when matted to a 6-speed manual.


The first Camaros are scheduled to arrive in customer hands in February 2009, however, there may be a delay due to a dispute with GM's interior parts supplier Cadence Innovation that went bankrupt recently. GM had given parts and machines to Cadence to make the Camaro parts. Since Cadence went out of business, it was supposed to return the equipment immediately, but that has not happened and now GM is suing its former supplier.

According to General Motors, if it does not manage to get the machines back from Cadence by January 12, then the start of production of the Camaro will most probably be delayed.