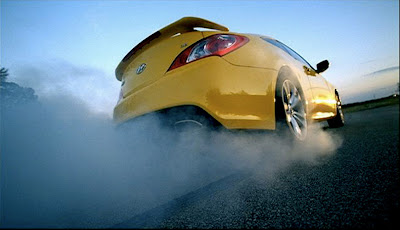 Hyundai will air its first two television advertisements for the new 2010 Genesis Coupe during the Super Bowl XLIII on Sunday, February 1, 2009. The two distinct 30-second spots will see race driver Rhys Millen getting behind the wheel of the 306HP Genesis Coupe 3.8L V6. Millen will navigate the rear-wheel drive sports car around the 2.54-mile, 12-turn race track at Road Atlanta in Northeast Georgia to show off the Genesis Coupe's capabilities.


The first commercial that will air in the first half of the game will be choreographed to music performed by Yo-Yo Ma in the version. A second musical talent will be introduced in the following 30-second spot, featuring re-edited precision driving footage matched to a completely distinct soundtrack.

"Genesis Coupe is Hyundai's most dynamic performance car ever and it is the second-consecutive all-new model introduction from Hyundai to debut during the Super Bowl," said Joel Ewanick, vice president of Marketing, Hyundai Motor America. "So many elements come together in these advertisements that showcase the Genesis Coupe's design and performance that we know it will cast a halo over the entire brand."

Aside from the range-topping 3.8-liter V6 version, the Genesis Coupe will also be offered with a 30-mpg 2.0-liter model with a low-pressure intercooled four-cylinder turbocharged engine producing 210 horsepower.