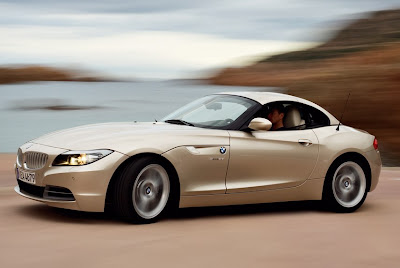 BMW has lifted the covers on its brand-new 2009 Z4 roadster that will make its world debut at the 2009 North American International Auto Show in Detroit on January 11. By far the most significant change on the new Z4 concerns the replacement of the canvas roof top with a retractable hardtop essentially eliminating the need for a coupe version. The two-piece lightweight aluminum shell opens and closes at the touch of a button within 20 seconds

Even though BMW's designers retained the current Z4's classic long-bonnet, short-overhang proportions, the car's styling has been smoothed out featuring less fussy details. One element we're not too fond of are the relatively large tail lamps, but we'll have to wait to see the car up close for our final judgment. The new Z4 is slightly larger than its predecessor thus promising to offer more comfort in terms of cabin and luggage space. BMW's new roadster is 5.8" (147mm) longer, 0.4" wider (10mm), and 0.3" (8mm) lower than the outgoing model while its wheelbase has grown 0.1" (2mm) to measure 98.3" (2.497mm).

Inside the styling is evolutionary with the cabin sporting new air-condition and radio controls as well as the latest generation of BMW's iDrive system which is combined with a larger 8.8'' screen. The Bavarian automaker claims that the boot space is 310 litres with the roof up and 180 liters with the top stowed away in the trunk.

The sDrive30i, which will be the entry-level model for the North American market, is equipped with a 255 HP 3.0-liter straight six. This version goes from a standstill to 60 mph in 5.6 seconds or 6.0 sec with the optional sport automatic.

The range flagship is BMW's acclaimed 3.0-litre twin-turbocharged engine that produces 306HP at 5,800rpm. The Z4 sDrive35i powers its way from zero to 62mph in 5.2 seconds (5.1 seconds for a 7-Speed Double Clutch Transmission-equipped car) and on to an electronically-limited top speed of 155mph - 250 km/h.

All Z4 models are equipped with BMW's Efficient Dynamics technology that includes Valvetronic engine management, brake energy regeneration, a gear-change indicator and tires with reduced rolling resistance. BMW has also added to the standard equipment an adaptive three-position Dynamic Drive Control system that allows the driver of the new Z4 to choose the drive characteristics of the car.


The new Z4 is expected to go on sale next spring.