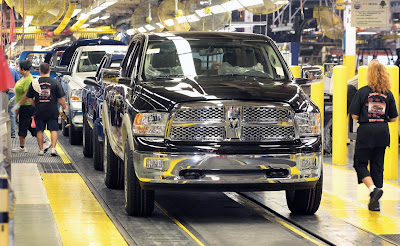 It is no secret that the entire automotive industry is facing one of its worse times ever at the moment so we can't say that we are actually surprised with Chrysler LLC's decision to close all 30 of its plants for at least a month at the end of the shift on Friday, December 19. According to Chrysler, the affected employees will not return to work any sooner than Monday, January 19, 2009. In an official statement the third-largest U.S. automaker said that while the company's dealers have many "willing buyers" for Chrysler, Jeep and Dodge vehicles, due to lack of consumer financing, they have lost an estimated 20 to 25 percent of their volume.


Chrysler LLC Adjusts Production as a Result of the Deteriorating U.S. Credit Crunch


"Due to the continued lack of consumer credit for the American car buyer and the resulting dramatic impact it has had on overall industry sales in the United States, Chrysler LLC announced that it will make significant adjustments to the production schedules of its manufacturing operations. In doing so, the Company will keep production and dealer inventory aligned with U.S. market demand. In response, the Company confirmed that all Chrysler manufacturing operations will be idled at the end of the shift Friday, Dec. 19, and impacted employees will not return to work any sooner than Monday, Jan. 19, 2009.

Chrysler dealers confirmed to the Company at a recent meeting at its headquarters, that they have many willing buyers for Chrysler, Jeep and Dodge vehicles but are unable to close the deals, due to lack of financing. The dealers have stated that they have lost an estimated 20 to 25 percent of their volume because of this credit situation.

The Company will continue to monitor the production schedules of its manufacturing operations moving forward."