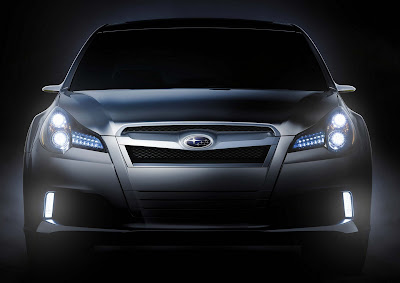 Well it looks like Subaru won't be giving us a glimpse of its highly anticipated Toyota co-developed RWD compact coupe the Detroit auto show in January. Instead, the Japanese carmaker will perform the global debut of the Legacy Concept that showcases the styling direction of the next generation Legacy sedan that is expected to arrive in U.S. dealerships in the first quarter of 2010.


The teaser image doesn't tell us much other than that the Legacy Concept will boast a more aggressively styled front fascia and flared wheel arches. As for the interior, Subaru claims that "it embodies modern, high-tech architecture while delivering a comfortable environment for occupants". Subaru Spartan press release also informs us that the concept car will be powered by a 3.6-liter Horizontally-Opposed Boxer engine and that it will feature the firm's Symmetrical All-Wheel Drive system.