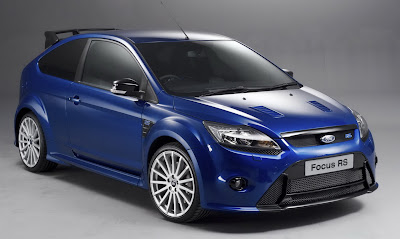 Following the presentation of the production 2009 Focus RS, Ford released pricing for its fastest-ever European production car. When it goes on sale in the UK in March, the Focus RS will be priced from £24,995 which comes to about $38,300 but for a various reasons that include the higher taxation system in the UK, the MSRP cannot be used for comparisons in the U.S. In the UK, the standard price of the flagship Focus RS compares with £20,408 for the 225HP Focus ST3, the existing top-of-the-range Focus model.


Under the bonnet of the Ford Focus RS is a turbocharged 2.5-litre, five-cylinder Duratec petrol engine, with a confirmed 305PS and 440Nm peak torque. Front-wheel-driven through a six-speed transmission, the Focus RS accelerates from 0-62mph (100km/h) in under 5.9 seconds and has a targeted top speed of 263 km/h or 164mph.


Other optional extras include partially leather-trimmed seats at £500 and, for £200, Bluetooth hands-free phone connectivity and USB port. Specifying a metallic version of the Performance Blue paintwork costs £395, while a Tri-Coat Metallic Ultimate Green finish carries a £695 price tag.