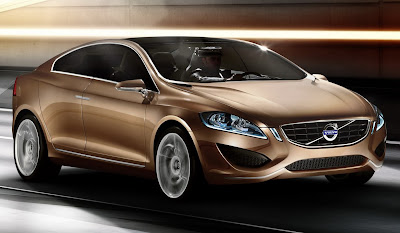 These are the first images of the Volvo S60 Concept car which will be unveiled at the Detroit Motor Show in early January 2009. According to the Swedish automaker, the concept gives an indication of what the all-new Volvo S60 will look like when it's launched in 2010. Even though the production model will be less dramatic than the prototype, it is clear that the S60 will be a distinct proposition in the compact executive sedan segment. The Swedes wisely opted for a four-door coupe look for the S60 as it differentiates their proposal from established rivals such as the Audi A4, BMW 3-Series and the Mercedes C-Class.

"The concept car's exterior gives a clear indication of what customers can expect of the all-new S60. On the inside we've been even more daring," says Volvo Cars Design Director Steve Mattin. One of the concept's most prominent features but one that will not pass into production is the lack of a B-pillar and the rear parallelogram doors that open by pressing a button. The doors pop out and glide parallel with the side of the car until they reach their end position by the rear wheel.

Another interesting detail concerns the headlamps as the lights create a silhouette of two miniature Viking longboats sailing side by side, one for main beam and one for dipped beam.

With a four-seat layout, the S60 Concept's cabin features the firm's trademark floating center stack which was created out of handmade, solid Orrefors crystal. The speedometer is designed as a three-dimensional glass spiral with the low numbers appear closest to the eye and the figures appear to be increasingly distant as the driver accelerates. Overall, the interior boasts a fresh and relatively uncluttered styling.

The engine that Volvo has chosen for the S60 Concept is a new four-cylinder 1.6-litre petrol unit which uses high-efficiency GTDi (Gasoline Turbocharged Direct Injection) technology producing an output of 180 HP. The Swedes claim that this engine in combination with a range of other technical measures makes it possible to cut carbon dioxide emissions to 119 g/km with an average consumption of just 5.0 l/100 km (47.0mpg US).

Volvo's first production car with GTDi technology will be introduced during the second half of 2009.

As a true Volvo, the S60 is also packed with several safety gadgets including a new technology that can detect a pedestrian who steps out into the path of the car automatically activating the car's full braking power if the driver does not respond to the danger. The technology, Collision Warning with Full Auto Brake and pedestrian detection, will be introduced in the production S60.