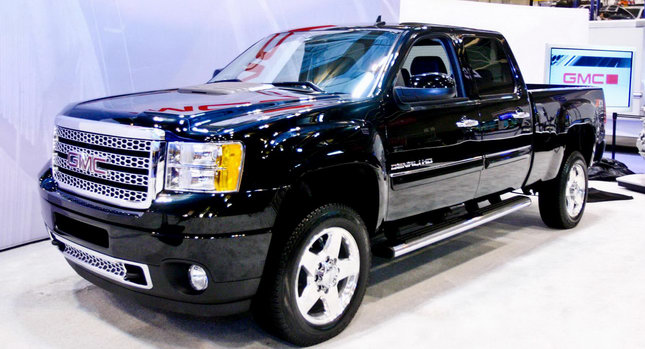 GMC's Denali-badged vehicles - Denali meaning "the high one", referencing Mt. McKinley - have always been the Cadillacs of trucks (except for Escalades, which are actually Cadillac trucks).

Sitting somewhere just south of Premium Luxury, Denalis have always provided buyers with well-equipped, more luxurious versions of GMC's regular lineup. For 2011 the General will be releasing the Sierra Denali HD based on the GMC 2500 (3/4 ton) and 3500 (1-ton) Heavy Duty models.

Available engines include GM's 6.0 liter gasoline-propelled Vortec (standard) and the revised Duramax 6.6L turbo diesel with 397 horsepower / 765 lb-ft of twist moving through an Allison 1000 six-speed transmission (optional). That Duramax is also B20 biodiesel compatible, which is a step in the right direction.

Possible layouts for the Denali HD 2500 and 3500 include crew cab, 4WD, and 2WD versions. With the 3500, the Denali package can be had with either standard or dually rear-wheel configurations, and with standard (6' 6") and "dually long box" (8') beds.

GMC product marketing director Lisa Hutchinson says, "We received such an overwhelming response to the new Sierra Denali 2500HD, that we worked quickly and decided to extend the model into the 3500HD series so those GMC buyers can also benefit from blending capability with premium features and styling."

Cadillac's Escalade may be all fun and good for the moms (and rap stars) out there, but does the Standard of the World offer something that can tow a moon?