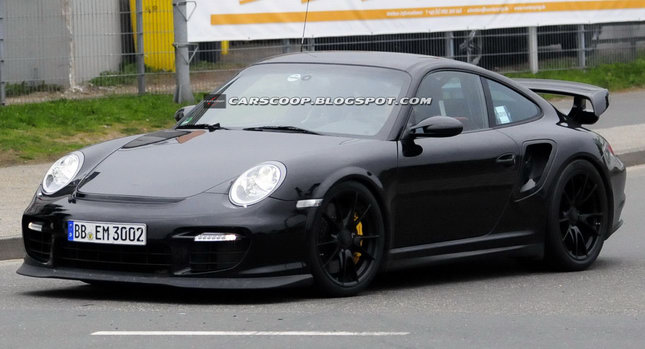 Porsche is set to release its most powerful factory-built street car ever, the GT2 RS. Possibly. Here are the spy shots.

So, how powerful is it? The twin-turbocharged GT2's flat six is rumored to be getting output rated in the 600-horsepower range (it could even more than the V10 Carrera GT's 605 horsepower) and is targeting a 7:22 lap time at the 'Ring. Value shoppers, on the other hand, will probably still want to stick with the ZR1.

Exterior differences to keep an eye on are mostly GT3 in nature: center-lock alloys, a hood-forward nose intake, mild front fender flares, a stripped interior with door pulls instead of handles, and a full roll cage.

Performance enhancements would be supplied by adding a fully-adjustable suspension to the corners, carbon-ceramic brakes, a titanium exhaust, and active drive train mounts. All that, and oodles of carbon fiber (including the wing, vents, and any potential add-ons) keep the weight down.

Speaking of weight, since the GT2 is already rear-wheel drive, it starts out at an advantage over the Turbo in weight (if not self-assurance). Factoring in the carbon fiber and a likely-optional $1,700 lithium ion battery, weight is said to come it at close to 90 kg under the outgoing model.

What's weird is this: one of the rumors going around is that the RS will be the only option available for buyers in search of a second-gen 997 GT2. At a price approaching (or possibly over) $300,000, isn't it too far above the Turbo S to justify killing a plain-jane GT2?