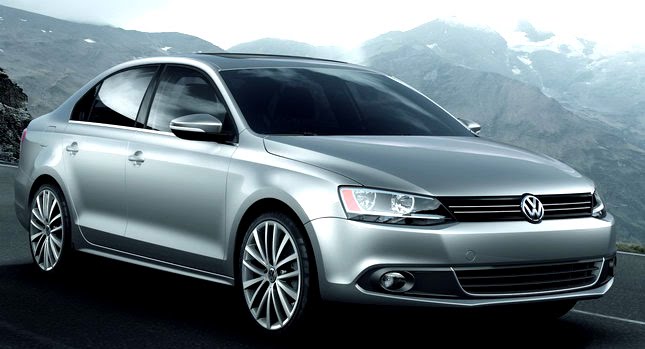 Volkswagen proceeded today with the official unveiling of the all-new 2011 Jetta sedan that will go on sale in the U.S. this October with prices starting at $15,995 (about €13,050 at today's exchange rates). European-market availability and pricing will be announced at a later date.

As we pointed out yesterday after the first batch of photos were leaked online, the new Jetta's crispier exterior styling with the Audi-esque rear-end and Scirocco-like fascia was inspired / previewed by the NCC coupe concept car shown at the Detroit Show this past January.

For the first time, the new Jetta will not be sharing any body components with its Golf brethren, though underneath, the two models share most parts as the four-door sedan uses a modified version of the Golf's architecture.

In addition, it also boasts a 2.76-in. or 70mm longer wheelbase with obvious benefits for passenger space. According to Volkswagen, legroom is now a 38.1 inches or 967 mm, which represents a gain of 2.6 inches 67 mm over the outgoing Jetta.

Inside, the 2011 Jetta's interior styling is far less refreshing than the exterior. In fact, it's as if [almost] nothing changed over the outgoing model. Even the instrument cluster looks eerily similar as VW did not go for the deeply recessed main dials of the Golf VI opting instead for a more plain looking instrument panel.

Diesel fans will get two common rail units, a 105HP 1.6-liter TDI and a 140HP 2.0 TDI. Except for the 1.2 TSI, all engines may be paired with either a 6-speed or 7-speed (depending on the model) DSG dual clutch transmission.

The 1.2 TSI petrol and 1.6 TDI diesel are also equipped with the BlueMotion Technology package that includes a Start-Stop system and battery regeneration.

Unfortunately for North American consumers, VW will not offer (or at least not for the time being) the 1.2 TSI and 1.4 TSI petrol units. Instead, U.S. and Canadian buyers will continue to get the same ol' 2.5-liter five-cylinder petrol found on the outgoing model.

Other powerplant options will include a 2.0-liter turbodiesel featuring common rail injection with 236 lbs-ft. of torque (320Nm) that can propel the car from 0 to 60mph in 8.7 seconds, a 2.0-liter naturally aspirated petrol, and from 2011, a range-topping 2.0-liter TSI turbocharged petrol.

All Jetta engines will be equipped with a manual transmission as standard with automatic transmissions offered as an option. On the new 2.0-liter TDI and 2.0-liter TSI, Volkswagen will offer the 6-speed DSG.