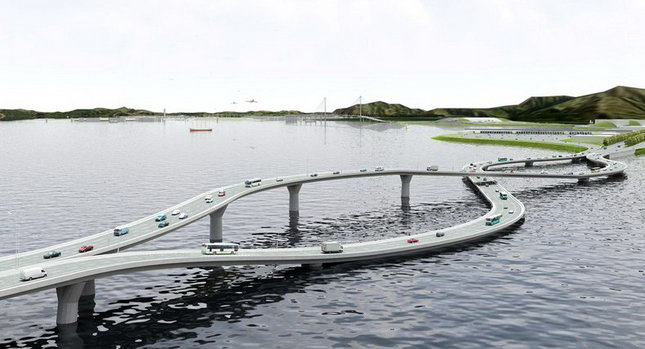 Britain may have handed over control of Hong Kong to China in 1997, but that didn't change the way, or rather, the side of the road on which its citizens drive in. Problem is that, while motorist in Hong Kong drive RHD cars on the left-hand side of the road, in China it's the opposite; they drive LHD vehicles on the right-hand side of the road. Now, try imagining to drive on a normal bridge that simply connects mainland China with Hong Kong...

To solve this problem, Dutch company 'NL Architects' designed a conceptual bridge called the "Pearl River Necklace". It makes use of a similar, but not identical, idea found on the Lotus Bridge in Macau; the 'Pearl River Necklace' bridge features roads that loop over each other in the middle thus allowing the vehicles to swap the direction of the traffic.

Of course it would probably be cheaper and much easier to construct the loop on land instead of over the water, but where's the fun in that.