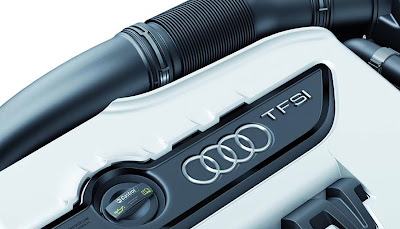 Following several months of number-speculations, Audi has released official details on its highly anticipated 3.0 TFSI V6 engine that will power several vehicles in its line-up. The 3.0 TFSI V6 engine that combines the use direct injection and compressor supercharging is rated at 290Hp at just under 5,000 rpm while it delivers its maximum 420Nm (309.78 lb-ft) of torque at 2,500 rpm and maintains this constantly until 4,850 rpm.

Comparatively, BMW’s twin-turbocharged 3.0-liter straight six develops 306hp and 400Nm (295 lb-ft) of torque between 1,300 - 5,000rpm. However, have in mind that it is common in the Audi/VW Group, to offer engines –especially those turbocharged- in various outputs. -Continued

Audi says that extensive comparative tests revealed the mechanical supercharger to be superior to a biturbo concept for this engine. The compressor in the 3.0TFSI engine (a Roots blower that can deliver 1,000 kg - 2204.62 lb of air per hour and force it into the combustion chambers at a boost pressure of up to 0.8 bar) is so compact that it easily fits inside the 90-degree V of the cylinder banks, in place of the intake manifold. The Germans support that because it is driven by the engine via poly-V belt, its full thrust is available from idle speed upwards, producing huge pulling power when driving off.

According to Audi the new 3.0 TFSI will offer an average fuel consumption of well under 10 liters per 100 km (23.52 mpg) in virtually all longitudinally engined Audi models, the concept for which it is envisaged.

From what we know, the 3.0TFSI will make its debut on the 2009 S4 and S4 Avant models at the Paris Show this fall; however what we don't know is the exact output of the supercharged V6 as there's a strong possibility it could deliver well over 290Hp.