Used Toyota Prius cars Selling for Over $35,000! How Stupid is that? 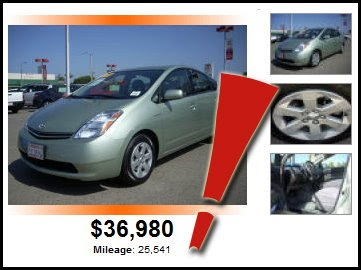 The same market that rightfully shunned large SUVs and pickup trucks in a blink of an eye as soon as gas prices surpassed the $3.50 a gallon mark has made hybrid cars so popular, that in many cases dealers/private sellers are asking over 35 grand for a used Toyota Prius as the Japanese carmaker cannot satisfy the demand. If you head over to ’s official website, a brand new fully equipped Prius Touring has an MSRP of $23,770…

For the record, we checked out used Prius prices on Autotrader, Cars.com and Craigslist. Surprisingly, there were hundreds of cars priced thousands of dollars over ’s official MSRP. Of course, private sellers and used car lots can ask whatever they want, but it’s up to you to decide what you’re willing to pay for it. In our opinion it’s totally not worth it and we’ll tell you why. -Continued

If you chose the Prius, then in 5 years you’ll have theoretically saved $3,550. That’s still not enough to cover the price difference between the official MSRP of the two cars which is $6,220, let alone the spiked prices dealers are asking for a… used Prius.

Heck, even if in the unrealistic scenario that gas prices in the skyrocket to $7 a gallon tomorrow morning (knock on wood), do the math and you’ll see that in five years, a Prius driver will have theoretically saved $6,090 in gas costs over a Corolla buyer. That still leaves the Corolla owner with $110 surplus.