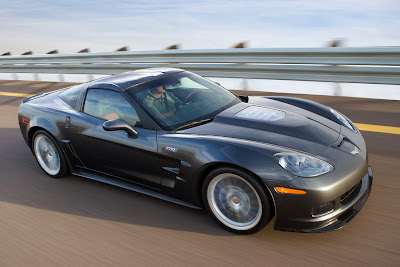 GM’s 640Hp and $103,000 Corvette ZR1 has posted one of the fastest times ever recorded on the Nurburgring race track for a totally stock production car: 7 minutes and 26.4 seconds. And yes, the ZR1 has shaved almost three seconds off the 2009 Nissan GT-R’s official time of 7:29.03.

According to Corvette Chief Engineer Tadge J. Juechter, the ZR1 tested was bone stock with the exception of the communications and safety equipment. The tires were production Michelin Pilot Sport 2 which have been developed specifically for the ZR1 while chassis alignment and vehicle height were set to factory specs. -Continued

Likewise, Juechter said that the engine calibrations were absolutely stock, emissions compliant and the car ran on pump (not racing) fuel. In other words, it was the same vehicle as the ones that will roll off the production line in and sold around later this summer.