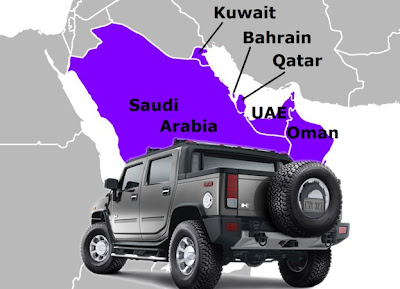 While most of us are feeling the economic impact from soaring gas prices in about every aspect of our lives, there’s one region in the world that not only hasn’t been affected, but thanks to astronomic revenues from $140-a-barrel-of-oil, its economy has boomed fuelling a humongous thirst for ultra luxurious cars and large gas guzzling SUVs. Of course we’re talking about the Gulf Arab region where for example, sales of Mercedes-Benz rose 31% in May on the same month last year.

Want more? According to a report from Reuters, while GM is closing production lines and halting the development of its large SUVs, sales of the American automaker’s full-size SUVs grew by 40% in the first quarter of this year! And why shouldn’t they as 95-octane gasoline costs a mere $1.36 a gallon or $0.36 / €0.23 a liter! That’s compared to $4 a gallon in the and more than $8 in . -Continued

Talking to Reuters, John Passadis, director of sales at General Motors said, "This market is buoyant in the large SUVs and premium cars. The price of fuel is still at a level where it does not impact you that much so you can have a large capacity engine.”