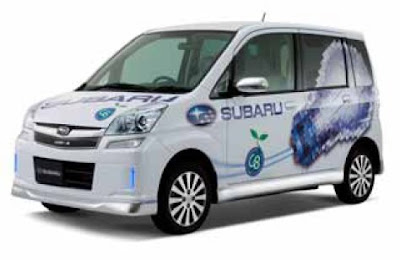 Subaru has revealed the first details of its Plug-in Stella Concept model, a prototype electric vehicle (EV) that combines the EV system employed in the R1e with the Japanese market only mini car, Stella. The 3.4 meter long concept is powered by a 40kw strong electric motor that develops 150Nm of torque and is capable of covering a distance of 80km or 50miles with a single charge of its lithium-ion batteries. The front wheel drive mini car’s top speed is 100 km/h or 62 mph. -Continued

The Japanes carmaker will provide five units of the Plug-in Stella Concept for use at the Hokkaido Toyako Summit to be held July 7 through 9, 2008. Four of the five cars will be used to transport government officials and other participants at the summit, while one vehicle will be displayed at the Environmental Showcase and it will also be available for a test drive. In addition, Subaru will provide one Stella Concept model to the Japan Post group for use in mail collection and delivery in the vicinity of Toyako during the summit.

Subaru plans to use the Plug-in Stella Concept in the development and test-marketing of the next generation of EV in in the near future.