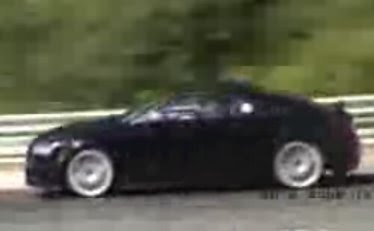 The highly anticipated Audi TT RS has been caught on tape by an amateur videographer on the famous Nurburgring race track in . Slated to be released sometime in 2009, the RS will be the top of the line model in the TT range competing against rivals such as the BMW Z4 M Coupe and the Porsche Cayman S.

It has been said, but not officially confirmed, that the TT RS will make use of a turbocharged version of VW’s spec 2.5-litre five-cylinder petrol engine. Then again, we say, why should Audi go into all that trouble to transform an old engine into one that will have to comply with the strict European emission standards when it has already developed an all-new 3.0-liter supercharged V6 TFSi unit for the new S4 that could easily be pushed to deliver over 360Hp? -Video after the jump