A Train That Never Stops at Stations: Ingenious or ... 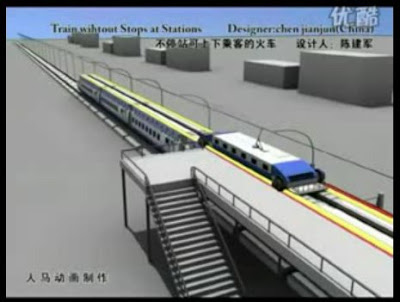 Peng Yu-lun is a Taiwanese inventor who came up with an idea that promises to help save energy and significantly increase train speeds. In a nutshell, Peng Yu-lun devised a concept for a train that never stops at stations to pick up or drop passengers. According to Peng Yu-lun’s concept, the base train enters the station and locks into a "boarding" car filled with passengers, which is put into motion ahead of time. After the rear of the travelling train catches up, the car is joined to the rest of the train. -Continued

Likewise, those wanting to get off the moving train will have to board the designated car on top of the train as it will be detached at the next station. Peng Yu-lun says that a train like the domestic Kaohsiung MRT has a maximum speed of 85 km/h, but due to stops, it achieves an average speed of just 35 km/h. If the train followed his concept, it would be able to maintain an average speed of 85 km/h throuout the entire trip thus saving time and energy.

While the idea sounds great in theory, it does have its flaws. Leaving safety factors aside, the system is restrictive in the sense that some stations are more popular than others – what happens if more people than the designated car can fit want to get off at a particular station, can you imagine the commotion!